Client filed lawsuit to invalid a Will prepared shortly before her father's death.  Client's father suffered from dementia and was under the 24-hour care of a caregiver during the last several months of his life.  Shortly after the caregiver took responsibility, and within months of the father's death, the father's Last Will and Testament was changed to name the caregiver as the sole beneficiary of everything the father owned.  In an effort to preempt any claim that the father lacked mental capacity, the caregiver had the father evaluated by a doctor on the morning the Will was changed.  Mike Lyons skillfully overcame the doctor's evaluation and cross-examined the caregiver at trial.  After three days of testimony, the the jury found the Will was obtained by fraud and undue influence and, further, that the father lacked legal capacity to write a new will.  The entire estate was returned to the Client.  The trial judge later remarked he did not think the case could be won, but credited the trial skill of Mike Lyons for the victory. 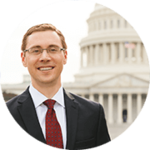