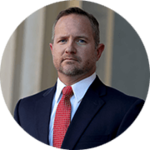 “While our country has the greatest military and legal systems in the world, both can be abused or neglected. Too often, servicemembers and their families are left to fend for themselves to correct the unjust actions against them. I know how to fight for your rights, your service, and your family when an injustice occurs and view it as my privilege to do so.” -Matt Osborn

Matt Osborn (“Matt”) is a leading appellate and military law attorney with over 16 years of experience. Matt has dedicated his practice to the military community and focuses on federal and military cases. His primary practice areas are courts-martial appeals, Officer Grade Determinations (OGDs), Board for Corrections of Military/Naval Records (BCMR/BCNR) cases, security clearance reviews and appeals, Discharge Review Boards (DRBs), and the preparation and correction of military pension orders.

Through his extensive experience advising high-ranking officials on legal matters and arguing cases before the highest military courts, Matt has the knowledge and skill to effectively represent service members of all ranks – from E-1 to O-10 – and possesses the unique ability to merge specific facts with relevant law to create a compelling story for your case.

As both a military and DoD civilian attorney, Matt served as advocate and advisor to the highest-ranking officials across the Air Force and the Department of Defense. Consistently ranked as one of the best in the Air Force, Matt handled over 175 military appellate cases and served as a criminal prosecutor, a criminal defense counsel, and a Special Assistant to the Undersecretary of Defense for Personnel and Readiness. Matt's comprehensive strategy and tireless work led to an astounding success rate. His top victories include a string of cases that were eventually heard before the Supreme Court, where the Solicitor General's office adopted Matt's arguments and resulted in a consensus opinion affirming Matt's position. See United States v. Ortiz, 76 M.J. 189 (C.A.A.F. 2017); United States v. Ortiz, 138 S. Ct. 2165 (2018).

As an appellate attorney, Matt was ranked #1 of 120 Air Force Judiciary company grade officers. At the time of his active duty separation in 2014 after a four-year Pentagon tour, The Air Force Judge Advocate General called Matt the “Top 1% of Majors supervised in 30+ years,” and the Deputy Judge Advocate General said Matt was the “#1 Major I have served with in 39 years.” Multiple Air Force Colonels also called Matt the #1 Major they had supervised in their 20+ year careers.

Matt is admitted to practice in Alabama, the Supreme Court of the United States, the Court of Appeals for the Armed Forces, and the Army and Air Force Courts of Criminal Appeals.

Thank you for contacting us. We will get back to you shortly.

Please complete all required fields below.